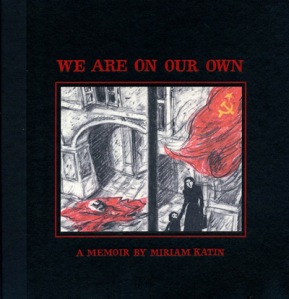 In a review of Miriam Katin’s graphic memoir We Are On Our Own, Joseph Serge, art editor for the Canadian Jewish News, considers Katin’s use of the graphic genre to be “somewhat fitting, since this memoir is told through the eyes of a child.” Although this observation conveys a degree of condescension for comics as a serious literary form, Katin’s position as a child survivor of the Holocaust does inform the transmission of the events she chronicles in the memoir. We Are On Our Own describes Katin and her mother’s experience fleeing from Budapest and hiding in the Hungarian countryside during the 1944 deportation of Hungary’s Jewish population to Auschwitz-Birkenau. Katin herself is present in the text as the toddler Lisa, whom she calls her “alter ego” and conflates with herself in interviews about the memoir. Lisa can be understood as a reconstruction of Katin’s childhood self from her adult perspective and signals the self-reflexivity with which Katin approaches this work. Through Lisa, Katin mediates the space between her childhood memories and her adult portrayal of them and addresses the limitations inherent in any project of self-representation. The narrative is structured around a double voice of memory—Katin’s adult and childhood selves. The tension between these voices expresses the difficulty of capturing memory, both in text and image, particularly for a child and under traumatic circumstances.

Katin’s decision to illustrate her story in the form of a graphic novel meant that she not only had to address broad concerns related to conveying memory, but also considerations about how one might visualize memory. In the graphic convention, the drawings themselves function as a layer of narrative voice. In this sense, Joseph Serge does seem accurate in designating the graphic genre as a particularly fitting medium through which to communicate the memories of a child survivor. Hilary Chute, editor of Art Spiegelman’s MetaMaus, companion to the Maus memoirs, explains the relationship between the graphic genre and memory in her book Graphic Women: Life Narrative & Contemporary Comics: “the spatial form of comics is adept at engaging the subject of memory and reproducing the effects of memory – gaps, fragments, positions, layers, circularities; it recognizes and plays on the notion of memory as located in mind and body and as, perhaps, shiftingly inaccessible and accessible.” The parsing of narrative into panels in the graphic genre is suggestive of the fragmentation attributed to traumatic memory, while the gutter between panels evokes the silence that so frequently punctuates the expression of trauma.

Katin’s sketchy expressionist pencil drawings also suit the portrayal of remembered events as they suggest the elusive and mutable quality of memory. In an interview with Samantha Baskind for the collection of essays The Jewish Graphic Novel, Katin discusses her choice to leave the sketches unrendered, an artistic preference that also speaks to the difficulty in capturing memory: “the stylistic divergence in We Are On Our Own happens because of the strong emotional nature of the story… the pages I had difficulty describing are left in an almost sketchy way. The reason was that once I almost scratched them into the page, I did not feel like rendering them anymore.” It is clear that Katin’s illustrations are not merely a pragmatic extension of her career in graphic art and animation, as some reviewers have suggested (Kirkus), but involve a thoughtful negotiation with the graphic novel as genre. It is interesting to consider the expressionist quality of her illustration, so evocative of memory as “shiftingly inaccessible and accessible” (Chute), in comparison to Spiegelman’s obsessively detailed cataloguing of his father’s memories. Her images often spill out of frames and particularly threatening images in the memoir—like the Nazi commandant’s leering grin and Russian soldiers’ violent entrance into the wine cellar—encompass several frames implying their lasting traumatic effect.

In the closing image of the memoir, Katin intimates the deterioration of memory over time. The map tracing her and her mother’s journey is lost, “like so many other things this old map too vanished.” The memoir is a reconstruction of this map. In an introduction to “In Plain Sight,” a strip about her aunts’ experiences in hiding, Katin writes about her continued interest in portrayals of the War period: “I am still looking for questions. In pictures and few words I am trying to find the line connecting events, people, causes, and results.” We Are On Our Own considers the way the child survivor’s position is mediated through questions, gaps, and fragments, which may or may not fulfill the desire to find the line that connects, but can yield thoughtful reflection on the precariousness through which memory is ordered and through which it orders the narrative of the self. 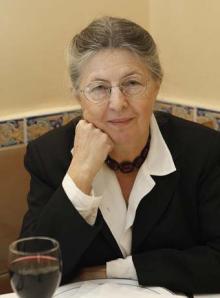 Miriam Katin was born in Hungary during WWII, where she spent the war years in hiding with her mother. In 1957 she moved to Israel and joined the Defense Forces as a graphic artist. Her experience in illustration led to an animation career in New York, where she worked for Disney, MTV, and Jumbo Pictures. We Are On Our Own is her first book and was followed by Letting It Go in 2013.