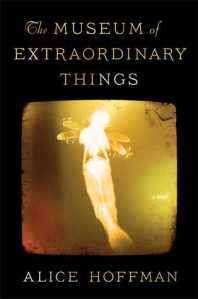 I drive 45 minutes for pizza when I really, really want it. That might sound crazy since I live on the Jersey coast and have, conservatively estimating, 1,456 pizza places around me at any given time. But I drive 45 minutes when I want thin crust, crispy, light, perfect pizza because it is perfect and I love pizza. I mean any pizza is good pizza but very few pizzas are truly exquisite and when you know a place that delivers exquisite you need to be loyal to it regardless of distance (and no, I won’t tell you the pizza place because it’s crowded enough).

I feel pretty much the same way about adult fairytales and magical realism—it feels like in a post-Twilight and Harry Potter world every other book on the shelves is about a magical being who is trying to both be normal and navigate their own magical awesomeness. It’s that negotiation between normal and abnormal that a lot of people love and it’s gotten to the point where books with that plot format are like pizza places—I’m overburdened with choices, most of them alright but not exquisite.

Alice Hoffman has recently given us The Museum of Extraordinary Things and I’ll give you one reason why you should get it: Hoffman is like my pizza place; I’m willing to go the distance for her. Hoffman has been a favorite of mine since Practical Magic and I found that a lot of that influence was present here. There is an absolute mastery of that negotiation between normal and abnormal and it feels completely plausible. What I loved best about both Practical Magic and The Museum of Extraordinary Things was that the lives of the characters felt very normal while existing in a very abnormal realm. Most people are not born as “freaks” but those who are must still strive to live day-to-day as something beyond an exhibit. It is this particular perspective that leads us through the tangled web of Extraordinary Things. The book is named for the actual Museum of Extraordinary Things, an exhibition location in Coney Island full of live and preserved “extraordinary” things that many would call freaks. We follow Coralie (I can’t help but see the name Coraline when I see her name, but it utterly fits her, mysterious and lovely and rare) and Eddie (the debonair man of many faces, all of them dark, brooding and alluring), though they don’t know we are following both of them or that their paths are inextricably connected.

Coralie was born with extended webbing between her fingers, making her look like a mermaid—an illusion carefully enhanced and crafted over the years by her father who owns and runs the Museum of Extraordinary Things. He feeds her fish, makes her hold her breath underwater for ever increasing time periods, and forces her to swim in icy waters just to make her seem more like a mermaid. He also dyes her skin with ink and has a custom fin made for her just to perpetuate the illusion. Her father takes on a wonderful role of being shrewd, dark, and foreboding (as villains go, he hits the palette perfectly). He is not so menacing as to be a caricature, not so vanilla as to be forgotten, and not too moral to be mistaken for a hero. He also exists in a setting where there are imperfect men who are not quite villains yet—rich men who exploit poor men, mercenaries for hire, criminal elements that simply exist in the turn of the century, the seedy New York underbelly. It was wonderful to see this side of New York—still half covered in wilderness—while we learned about other freaks of nature. Eddie is a freak of his own making—an immigrant Jew who has denounced his religion and becomes a crime photographer, gets a first-hand account of the famous Triangle Shirtwaist Factory fire, and has an uncanny ability to track people down like some sort of human bloodhound. Eddie is jaded, he knows the world is dark, and he is always navigating in it by some crooked star he hasn’t named; a star he will later realize is Coralie. They are perfect for one another but exist in different worlds that don’t seem to intersect for the first half of the book. When it becomes apparent that they are, actually, going to meet, the audience can’t help but feel the anticipation in every ounce of their being.

I found elements of the story obvious, but it didn’t spoil how much I liked the book. I am loathe to mention any more plot in case I ruin the allure of the Museum (please, by all means, enter for your chance to observe the extraordinary things inside). It was an utterly pleasant read, perfect for a mild summer morning with a cup of tea.

Alice Hoffman is a writer and breast cancer survivor living in Boston. She is a prolific writer in the genre of magical realism and young adult—she is well known for the book (and screenplay) of Practical Magic but other notable works are The Dovekeepers, Blackbird House, The Ice Queen and many more. Her website is http://alicehoffman.com where she updates her touring schedule and upcoming projects.

One response to “The Museum of Extraordinary Things by Alice Hoffman”