Lisa Rizzo tackles themes close to home in her chapbook, In the Poem an Ocean. In three sections—Daughter, Desire, and A Place in the World—Rizzo explores the interior and exterior landscapes of our lives in clear and often surprising imagery that evokes both longing for a distant time and craving for connection and new experiences.

The first poem in the collection, “Daughters,” sets the tone, introducing us to her keen sense of belonging to a line of women, her place as the eldest daughter of an eldest daughter of an eldest daughter, and drawing us in with her confession that she has broken the thread by remaining childless. Then, she finds a way to recreate the family cloth, weaving her young niece into the legacy with new ribbon. In “Face of the Madonna,” Rizzo sees the virgin mother in the red rock of the Rio Grande, in the tall grass of the prairie, in her mother as she watches her toil in the garden picking beans. Rizzo writes:

dressed in the sky,

the people’s past with what was,

Her poems are rife with such attempts to make peace with contradiction. In “Whole Cloth,” her schoolgirl mortification at having to wear her grandmother’s old coat, remade to fit her by her mother, rests uncomfortably alongside her later understanding of her mother’s skill with cloth. We rarely appreciate the gifts given in childhood. Similarly, an old phone number evokes the memory of a childhood home, not the pretty, romantic one, but the one that stood out among the numerous others that dotted her early landscape. In “Buttons,” Rizzo paints the picture of her grandparents, the buttons on their garments emblematic of the buttoned up/buttoned down couple who never seemed to talk to each other:

and no good for canning. She could dip her hands in anytime

Grandpa needed a shirt mended. He might sit across the porch as she sewed,

both of them staring out at the woods across the highway,

In Part Two, Desire, Rizzo allows us more deeply into her personal landscape with poems about love and loss. In “Finding Absolution,” the narrator finds herself in a Paris apartment, wallowing in self-pity and loathing:

Then in that hotel room

I found the key.

…I slipped the noose of your love

A beautiful revelation: We can free ourselves from our past. In “Uneasy Grace,” Rizzo and her niece write haiku while sitting in church, the service droning around them as the two escape, Rizzo from her childhood guilt, her niece from the present-day boredom of a Sunday morning pew. She writes about being a teacher and what it means to reach youngsters with poetry and literature. She confronts her aging self in the renewal of a bedside table painted yellow and lovingly decoupaged, as if her graying hair and crow’s feet might disappear along with the chips and dings of the table.

In the third section, A Place in the World, Rizzo’s wanderlust unearths her sense of otherness and dislocation while also celebrating the ways people all over the world are the same. Many of the poems also reflect the wonder of nature and our inactions with it. One of my favorite poems in this section is “Galapagos,” the final few lines of which read:

As the silent witness of

a lone reef shark glided below me,

I began my own evolution,

A metamorphosis. Rizzo’s language is rich in brilliant imagery, giving us unusual glimpses of the everyday, as in this line, “a tree I had left/completely dressed/now shivered naked…” In the end, this collection of poems lifts up the ordinary and transforms it into something we can taste and hear and touch. With our senses and with our hearts. 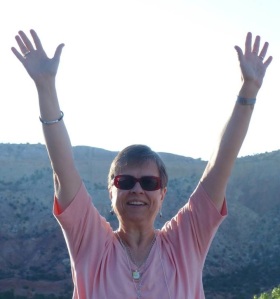 Lisa Rizzo is a poet and middle school language arts teacher who manages to combine her love of words with her day job. She was born in Texas, grew up in Chicago and now lives in the San Francisco Bay Area.  She is the author of the chapbook In the Poem an Ocean (Big Table Publishing, 2011). Her work has also appeared in such journals as 13th Moon, Writing for Our Lives, Earth’s Daughters, Calyx Journal and RiverLit.  Two of her poems won 1st and 2nd prizes in the 2011 Maggie H. Meyer Poetry Contest.  This year, five of her poems appeared in Aspiring to Inspire,  an anthology published in honor of Women’s History Month. Rizzo also blogs at Poet Teacher Seeks World (http://poetteacherworld.blogspot.com) 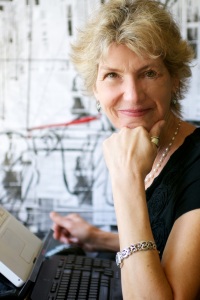 Guest writer Marcia Meier is an award-winning writer, editor, writing coach, and director of the Summer Writing Institute at Antioch University, Santa Barbara. She is the author of Navigating the Rough Waters of Today’s Publishing World, Critical Advice for Writers from Industry Insiders (Quill Driver Books, 2010) and Santa Barbara, Paradise on the Pacific, a coffee table book published in 1996 by Longstreet Press in Atlanta. Her recently completed memoir, About Face, A Journey to Self, is with her agent.

She has free-lanced or written for numerous publications, including the Los Angeles Times, The Writer magazine, Santa Barbara Magazine, Pacific Standard Magazine online, and The Huffington Post. A print journalist for more than 20 years, Marcia worked for four daily newspapers in the roles of reporter, copy editor, assistant city editor and editorial page editor. She was with the Santa Barbara News-Press for nearly 10 years, and served as editorial page editor for most of that time. She holds an MFA in creative writing and a bachelor’s degree in journalism, and has taught for various institutions, including Cal Poly, San Luis Obispo, Westmont College, Brooks Institute, and Santa Barbara City College Adult Education.

2 responses to “In the Poem an Ocean by Lisa Rizzo”

Error: Twitter did not respond. Please wait a few minutes and refresh this page.